CRASH!! CRACK!! KA-CHOOOOMM!  A sudden explosion rocks all of Megalopolis with a massive earthquake causing an entire section of the city to fall into the chasm. Where those city blocks stood is now a mountain ridge. Before anyone has time to react, ancient dinosaurs start pouring over the ridge. As if that wasn’t enough, gangsters and thugs have taken the opportunity to riot within the city, taking anything they can and attacking anyone who gets too close. The citizens of Megalopolis are trying to find refuge within Freedom Tower or the hospital. But will they be able to survive the perilous journey across the broken city? 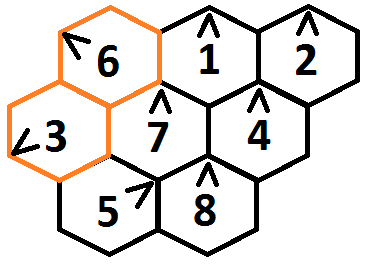 Tiles 3 and 6 are Insula Primilis
Remaining tiles are Megalopolis

The Elevation 2 and Elevation 3 mountain hexes of Tiles 2 and 8 can never be hazard spaces from Hero abilities (Blazing Tornado, Turret Bot, etc). This includes the entire ridge of those tiles.

Hex Grid Diagram
Several mechanics in this scenario require being able to designate a specific hex on a tile. Spawning humans requires this. These rules will use a method like 4:3:4 to show which hex. The first number shows which tile is being referred to. The second number (Blue text) shows which column on the tile to use. The last number (Red text) shows how far down the column to go, coming back if need be. 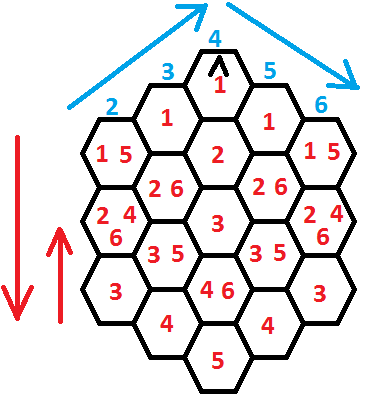 Place Extraction Points
Place a marker on (8:4:4) and (2:4:2). These are the points the Civilians are attempting to get towards.

Spawning Humans
Create a pile using all of the remaining human tokens, alternating between Thug and Civilian, starting with Thug (there should never be more Civilians being placed than Thugs). Take the top token, as it is, and use the following to determine its placement.

Roll 3 dice: 1 White, 1 Blue and 1 Red.
White die determines which tile the human appears:  1 > Tile 5
2 > Tile 7
3 > Tile 1
4 > Tile 2
5 > Tile 4
6 > Tile 8
Blue determines which column the human appears on. Orienting the tile with the tile number at the top, count across the top row of hexes, starting with 2. 4 is the peak of the tile, with the tile number. 2 and 5 are the other corners and 3 and 5 are the spots between. Reroll a 1.
Red determines how far down in that column to place the human. Counting the first hex as 1, count down and and back, if needed. If that spot is occupied, place the human is the last available space that was counting during the Red roll. If need be, reroll Blue. If need be, reroll White as well.
If any Civilians would be placed on Tiles 2 or 8, flip the token to be a Thug instead.
Humans do not get a turn the turn they are spawned.

Respawn Dinosaurs
Dinosaurs respawn at the start of the round and each dinosaur killed will respawn.  There should always be 4 Raptors and 1 T-Rex on the board at the end of the Respawn Dinosaurs phase.

T-Rex
The T-Rex will attempt to move towards the target with the highest Health, even if there is a closer target.  However, if the T-Rex moves over or adjacent to a non-environment target at any point during its movement, the T-Rex attacks that target.  The T-Rex will only attack each target once per movement.  If a T-Rex approaches a group of targets, it will attack all adjacent non-dinosaur targets at the end of its movement.

Raptors not in a pack move first.  If Raptors can not see any non-environment targets and are not in a pack, they will move towards each other into a pack.
If Raptors can not see any non-environment target and are in a pack with at least 1 other Raptor, all Raptors in the pack (even if one member has already moved this turn) will Sprint towards the closest scenario marker, even if they can’t see it.
Raptors generate hazard spaces, which work as normal for Sentinels: Tactics.  However, Raptors also trigger their hazard space attack if another target enters the Raptor’s range as a result of the Raptor’s movement.  So a Raptor will attack a target it approaches or a target it passes during its movement. If a Raptor approaches a group of targets, it will attack all adjacent targets at the end of its movement.

If a Raptor kills any target, that Raptor and all Raptors within the same pack, if any, get another turn.

In any case without specific ruling, the players get to choose in which order the Velociraptors take their turns.

Heroes
The Heroes get to take their turns during this phase.

If the Heroes kill the T-Rex, each Hero gets to take either an Attack +1 or a Defense +1 token.

If a Hero is incapacitated, they move back to Freedom Tower and their movement roll becomes “Roll 2, take the lower” for their next turn.

Thugs
On their turn, Thugs will attempt to move towards the target with the lowest Health, even if there is a closer target. They will not avoid any hazard spaces. Thugs will attack any non-Thug target.

If a Thug can not see any target, they will remain in their spot.
Thugs stop moving as soon as they can attack a target and will not move away if there is already a target within reach at the start of their turn.
Like Raptors, Thugs generate hazard spaces. However Thugs do not trigger their hazard space attack if they move past a target.  They only use their attack at the end of their own movement and when a hazard attack would normally trigger. If a Thug approaches a group of targets, it will attack all adjacent targets at the end of its movement.

If the Thugs kill the T-Rex or a Hero, after the current turn, Spawn all available human tokens as Thugs then the Thugs all get an additional turn.

The players get to choose in which order the Thugs take their turns.

Civilians
Civilians will move towards the closer extraction marker, regardless of line of sight. They will move in such a way that they are numerically the closest they can get to that marker, taking the path of least resistance. In case of ties, the players get to choose. They will not avoid any hazard spaces.

Heroes can use an action to move an adjacent Civilian up to that Civilian’s Move Value in any way that Hero chooses.
Civilians can not enter an extraction point if it is occupied by a Villain token. Civilians can enter an extraction point if occupied by a Hero or Civilian.
Respawn Human
Humans respawn at the end of the round and each human token removed from the board for any reason will respawn.  There should always be every human token on the board at the end of the Respawn Humans phase.

Scoring
Every time a Civilian is killed, the Villain team gets a point.  Remove the Civilian from the board and place it in the pile to be repawned at the end of the round.

Every time a Civilian ends its turn on an extraction marker, after resolving any attacks made on it and surviving, the Hero team gets a point.  Remove the Civilian from the board and place it in the pile to be repawned at the end of the round.

Play continues to the first team to reach 12 points.

For Added Challenge
Add one or more of these small changes to ramp up the difficulty if you are finding this scenario too easy.  The following rules are roughly ordered least game changing to most.

– When a Hero becomes incapacitated, all Civilians on the board flip to Thugs.
– T-rex’s Move Value increases to 5.
– Thugs have 2 Health.
– A Thug that kills any target gets +1 Attack and +1 Defense permanently and cumulatively.
– The Villains only need 8 points to win.
– Raptors gain Mobility and 4 Move Value.
– Civilians can not enter a scenario marker if there is a Hero or another Civilian on that marker.
– Remove the scenario marker from the hospital.

Until there is enough playtesting to find a good balance for scaling the scenario based on number of Heroes, having more Heroes only makes the scenario easier.

Suggested Tactics The Heroes need to divide their attention between keeping the dinosaurs contained, killing thugs and helping move civilians along. If the dinosaurs get into the city, they can cause massive casualties. Keeping them within their area is extremely important.  At worst, keep a hero hunted by the Raptors to keep them away from the Civilians.

Because of the elevation of Freedom Tower and that Civilians only have 3 move value, they can not enter Freedom Tower from the top and they must walk all the way around from the base of the tower, which causes a bottle necking. Heroes should consider using their actions to help move the Civilians along. Also, when using this action, the Hero gets to choose how the Civilian moves, the Hero can move the Civilian closer to the Hospital, which is easier to enter and can help maintain a better flow towards their safety.

A Thug which appears near an extraction point needs to be dealt with immediately. Civilians will continue running to their death at the hands of the Thug until he is killed.

Change Log (v 1.1)
– Modified villain movement to give each a unique ‘flavor’.
– Added Component section
– Added For Additional Challenge section
– Fixed formatting and sectioning of the rules
– Clarified some rules